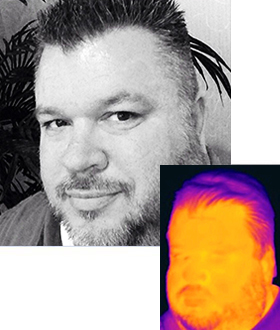 Dave Sirmans joined The Snell Group in the fall of 2008 as Operations Manager for the inspection side of the company, Snell Thermal Inspections.  He later transitioned into the role of Instructor and Consultant where he also assists in the development of new curriculum for The Snell Group, and is a trainer for several infrared thermography courses. Dave is a Certified Maintenance & Reliability Professional (CMRP) as well as a Certified Electrical Safety Compliance Professional (CESCP) with the National Fire Protection Association (NFPA).

Prior to joining The Snell Group Dave worked in Reliability as lead engineer in an electrical testing company where he developed and implemented NFPA 70E compliance for their infrared inspections outfit, as well as started an engineering services division within the company.

Additionally Dave founded an arc flash analysis and electrical safety training business that prospered throughout the southeast United States and originally started his career with the US Navy where he spent eight years as an Avionics Technician and Electronics Instructor.

He has a Bachelor of Science Degree in Electrical Engineering from New York Regents University and has written a number of articles for industrial publications and conferences including four papers from the Thermal Solutions conference for thermographers; “Recognizing the Dangers of Magnetic Heating” (2006), “Infrared Technology in RF System Maintenance and Repair” (2006), “Distribution Fusing and Infrared Technology” (2007), and “NFPA-70E and “Infrared Inspections: Compliance in a Non-compliant World” (2008).

Outside the office Dave enjoys the outdoors and spends most of his leisure time with family, currently residing with his wife and children in Georgia.

Dave instructs Level I, Level II and our Electrical and Mechanical Specialty courses.