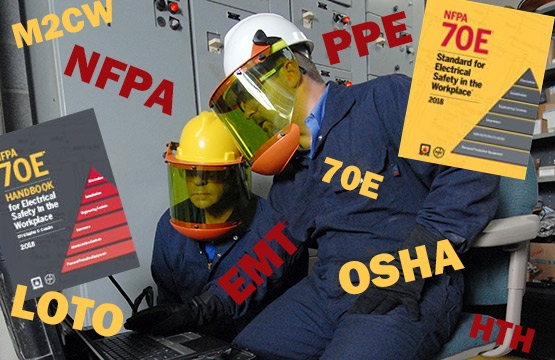 I was in the military for the better part of a decade, so acronyms are something I’ve grown accustomed to. But, sometimes their overuse gets downright ridiculous. I had an e-mail from a former student just a week ago reminding me of this that was chock full of letters. He wrote, “The NFPA says PPE for EMT.”Or, translated for the layperson, The National Fire Protection Association says Personal Protective Equipment for Electric Motor Testing. Whew … okay, maybe acronyms aren’t so bad, but alphabet soup aside, he needed an answer. Do you in fact need personal protective equipment for electric motor testing? Here’s what I told him.

In a word —yes. Electrical safety continues to evolve with each new revision of NFPA-70E (in case you’ve been living under a rock for the past 10 years that’s the Handbook of Electrical Safety in the Workplace) and the consensus standard that OSHA (the Occupational Safety and Health Administration) uses for the basis of their own electrical safety standard. 70E is about more than PPE, but the focus of many reliability folks rests squarely there. As with many standards it’s surrounded by speculation, mostly because people seem to afraid to just pick up the book and read it. So, some of you may be surprised to learn that even when performing de-energized EMT, you may indeed need to be adorned in arc flash rated PPE. Here’s why.

Most electrical folks are familiar with the concept of LOTO. More alphabet soup, sorry. Lock Out/Tag Out. Beginning two revisions ago or so, 70E started taking it an additional step, requiring equipment be placed in what’s called an “electrically safe work condition.” This is defined as de-energized, locked and tagged out, then measured to ensure de-energization has been achieved. Once equipment is in this condition, PPE requirements are relaxed. Here’s the kicker though, until you have measured with a meter to ensure the equipment is in fact shut down, you’re still supposed to be adorned in arc flash rated PPE applicable to the equipment in question.

So, even if you have turned off the disconnect for the motor starter, until you verify that the starter is in fact de-energized, you need to be wearing whatever the label on the starter indicates is required. Not only that, but if the line-side of the main breaker inside the starter is exposed, and stays energized when the starter itself is turned off, you’re still at risk and PPE is required if you’re inside the flash protection boundary of the starter. Depending on the starter configuration, and how far you can get away from the starter to do your testing, you may find yourself wearing arc flash rated PPE for what is considered a “de-energized” test method.

The best way to know for sure is to become as intimately familiar with the NFPA-70E as you can be. It’s only a $40 investment and it’s less than 100 pages long. That’s like eight Starbucks coffee drinks and a week’s worth of sports section. You can do it. You need to do it! Everyone wants to go home at the end of the day, eat wings, and drink beer, or whatever you do for fun. Safety makes that happen! That’s M2CW and HTH!