In Memoriam of Greg McIntosh

The Snell Group is deeply saddened to announce the death of Greg McIntosh. Greg was the manager of Snell Infrared Canada since 1999. In addition to conducting training, he provided engineering support in the company, developed new courseware, and performed research and development in emerging applications. Greg was a registered Professional Engineer specializing in heat transfer and thermodynamics. 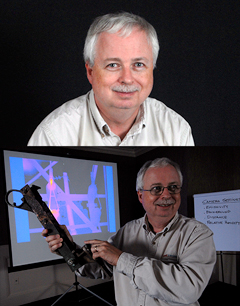 He was actively involved in the thermal infrared imaging industry since 1976 and has worked in the petrochemical industry, thermographic consulting, building science, process automation, and for infrared equipment manufacturers. He started the first North American Infrared Training Center for AGA Infrared Systems (now FLIR Systems) in 1979. He has trained thousands of thermographers, some of whom are leading industrial experts in the field today. He spent a number of years developing and bringing to market products for infrared process control and automation in the steel, glass, and metals refining industries. He has written training manuals and published practical guides and papers on applied thermography including a chapter in the handbook "The Theory and Practice of Radiation Thermometry." He recently co-authored the “Infrared Thermography Guide” for EPRI (Electric Power Research Institute).

Greg was on numerous technical and standard committees and was chairman of SPIE's ThermoSense XI in 1989 and continued to be professionally active until his death. He participated in the local "Engineers in the Classroom" program and had a special interest in natural science applications. His thermography on bats can be seen in Sir David Attenborough’s BBC "Life of Mammals" series and on Canadian Geographic "Wild Tech" special. He was a graduate in Mechanical Engineering from Carleton University in Ottawa, Ontario. He had taken numerous continuing education courses at such institutions as George Washington University, University of Wisconsin, York University, and the Professional Engineers of Ontario.

He was a valued colleague throughout The Snell Group, and a strong advocate for professionalism in the industry. He will be deeply missed by all at the company, as well as many other people throughout the infrared thermography community.

Founded in 1986, The Snell Group offers training, certification, inspection, and consulting services for IR and EMT professionals and their programs world-wide. Throughout the company’s history, The Snell Group has helped thousands of companies, both large and small, to reduce risk, increase up-time, save money, conserve energy, and improve safety. Their client list is diverse and includes companies such as Alcoa, General Motors, Chevron, Caterpillar, DuPont, and Boeing.