Sounds May Lead to Problems 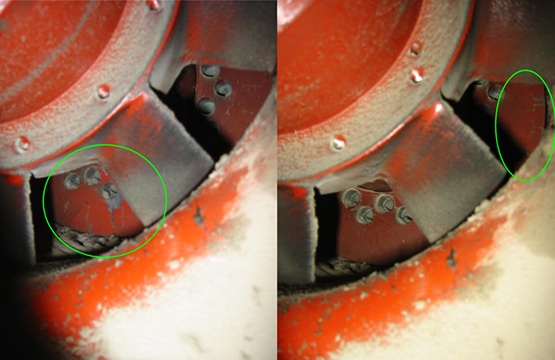 While conducting a mechanical IR route I was looking at a large 1000hp medium voltage motor, and something just did not sound right. There was a rhythmic hum in the motor that I had not heard before. There were no problems indicated in the thermal inspection in either the bearings, the stator area, or in the driven equipment. Noting the equipment number for later reference, I completed my route and returned to the control room to ask the operator if there were any problems with the 1000 hp that might have been indicated in the control software. The operator reported that all was normal and no alarms have been indicated. I returned to the PdM office and reviewed the motor data for that piece of equipment and did not see any anomalies. Having not found any data that would explain the sounds I heard, I asked the vibration tech in charge of that area if he had anything that might explain what I had heard. The vibration data did not have any alarm points triggered. The vibration section recorded data on that motor weekly. Whereas the online testing was conducted twice a year. I then decided to take online readings, and discovered that the data indicated there was a possible rotor issue, the pattern in the low resolution pointed to rotor bars as being the issue. Not having any other data that would support removing and replacing the 1500hp motor. The motor program was just starting (about one year) and there was not any confidence in the program at the maintenance management level of the customer (they put their faith in the vibration program). I decided to remove the inspection ports (a small 2.5 inch cover used to measure the air gap during assembly) while the motor was in use (operations would not shutdown the motor) a strobe light was used to examine the end ring of the rotor on the non-drive end. There were cracks at the point were the rotor bars were welded to the end ring. (data and images following)

Once the motor was replaced and the “damaged” motor taken to a motor shop, the motor shop reported that there were over 50% of the end ring welds were broken.

Vibration data “saw” the bars as the running frequency sidebands with slight elevation in the readings that did not trigger any of the alarms.

The data that I pulled on this motor was not scheduled. The normal route would have been in another month and half. That motor may not have lasted until the scheduled route. The sound difference that the motor was making led me to investigate the cause and prevented a catastrophic failure.

Being aware of changes in the sounds that you hear even while traveling thru the plant, they may lead to a finding that validates online motor testing. 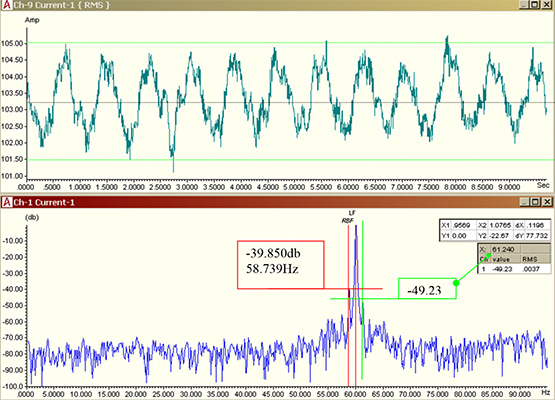 Data taken (05/08/07) compared to data taken on 01/17/07 indicates that a change has happened for the determent of the motor. Data indicates that the rotor bars have suffered damage that may damage the stator if left in service.

In the upper table is a 10 second current trace on the motor while online showing the “surging” or cyclic pattern of the motor. This surging is related to the rotor bars that are not connected to the rotor circuit (broken end ring or solder joints between the copper bars and the end ring of the rotor) creating higher current demand to perform at the same level while the broken components are at the power point in the rotation (rotor slip).

The data below, in the same trace has far less “swing” in the current trace. And is not in a cyclic pattern.

The lower table above is the FFT current the sidebands around the LF (line frequency) are indicators of rotor bar faults. @ -39.85 db down faults are present. The FFT below has minor side bands @ -64.32 db down, at these lower levels “normal running” bar patterns are expected. 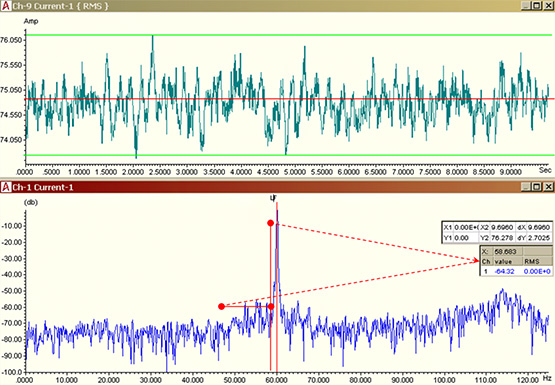