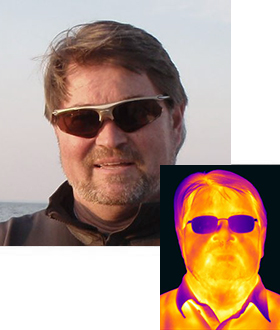 Scott joined The Snell Team in 2002, quickly discovering that the support from the Snell staff was essential to success. Starting as an FTE at a steel mill in St. Paul, Minnesota, initiating and running the IR Electrical/Mechanical and MCA program, he later became a Regional Reliability Technician working at several different industrial locations across the U.S. performing IR and MCA, filling in and doing quarterly assignments. He became experienced in PDMA MCA Fault Zone Analysis through PDMA/Snell and successfully completed Snell’s MCA Circuit Offline Analysis Level 1 course.

In the last few years, Scott was assigned to motor testing on a drilling ship in the Gulf of Mexico, primarily testing the thrusters that maintained the exact position of the ship while it drilled on the ocean floor. He was also assigned to consult with the TEP Power Group at a power generating station in Arizona, maintaining their IR and MCA offline and online program, and mentoring and training new permanent employees, which included testing a wide range of motors from 440-volt to 12,800-volt.

Predictive Maintenance and Condition Based Monitoring have been Scott’s focus for more than 25 years, starting in the iron ore mines of northern Michigan. He was fortunate to be part of a 7-man team with a brilliant supervisor, learning Vibration Level 1 & 2 from technical associates and Level 1 & 2 Thermography from Snell Infrared with a ASNT Level 2 Certified IR, SNT-TC-1A in Thermography, as well as Balancing, Laser Alignment, Database Building and Level 1 Airborne Ultrasound. During this time, Scott trained and mentored new analysts in the Machinery Analysts Group with IR Electrical/Mechanical, Vibration Analysis, and Balancing.  He also worked on initiating and directly participated in building the hierarchy in the first computerized maintenance mainframe-based system, “PERMAC” at Cleveland-Cliffs Iron Company at the Tilden Mine.

Having served in the US Coast Guard Reserves at small boat stations during his mining career, Scott became even more connected to the Great Lakes region where he resides. He enjoys his family, most of whom live nearby. Living near Lake Superior is a big part of his life and he can be found during his free time camping, hiking, rock hounding, canoeing and generally just being surrounded by woods and water.