How to Inspect Rolling Element Bearings 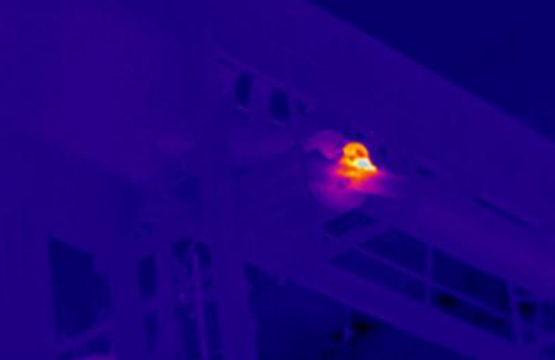 When you hear the term “rotating equipment,” what do you think of? The term rotating equipment is a bit of a catch-all and covers many pieces of equipment that don’t fall into the electrical, stationary, or buildings categories. Everything that moves - motors, bearings, belts, augers, gearboxes, hydraulics, pneumatics, pumps, couplings, seals, etc. is typically considered rotating equipment. This tip discusses how to inspect rolling element bearings in both high- and low-speed situations using a comparative or exception methodology. Baseline, comprehensive, and trending will be covered in a future tip.

What is the difference between the two speeds? Typically, the vibration folks like the high-speed bearings, but many times avoid the low-speed ones. The breakpoint many times tends to be at about 300 RPM. As the speed gets slower the data collection time increases and the resolution decreases in the vibration spectrum. However, for thermographers the speed of the bearing is not as much of a concern because fast or slow they still show thermal patterns as equipment starts to fail. Inspection time with infrared is not affected by rotational speed but the speed may still play a role in determining the severity of the anomaly.

Also, sometimes it is the location of the equipment being inspected that makes using vibration difficult to do, and thermography a better option, as can be seen in the images below. It would take a lift to get a data collector up to these low-speed bearings and it would take approximately a half-hour per bearing to get the lift into position and collect the data. (in this example there are ten in the general area) Another option might be the installation of permanently mounted remote sensors/transducers for data collection but this involves additional costs and is typically reserved for high criticality equipment. Using infrared, a skilled thermographer can easily inspect these bearings in less than a minute. This particular bearing has a speed of about 30 RPM.

With IR we can inspect a group of like devices very quickly. To the naked eye, there is no difference between the bearings in the images below. However, thermally we can “see” the second shaft lower bearing a significant temperature rise. These bearings have a speed of about 900 RPM and vibration analysis would need to collect data on each bearing (all six), taking about three to five minutes each. Then the data would need to be analyzed before determining that there is a problem. It would only take the experienced thermographer the time to properly adjust their image to determine there is an issue in this group of similar components. Infrared can be a great tool for helping reliability and maintenance personnel more efficiently allocate other diagnostic assets, such as vibration analysis or ultrasound, to help diagnose the specific nature of the issue(s).

What are we looking for when we inspect bearings? Inspecting several different bearings, but under similar conditions and in close proximity to each other, we look for unusually hot or cool bearings. Which bearings do we compare with each other? We are looking for temperature differences between bearings on the same shaft or in like devices with similar loads and under the same environmental conditions at the same location. Sun and wind or air circulation in a plant on some, but not all bearings can make a big difference in what is detected. The same with load; if some are running continuously, where others run intermittently, they probably will have different thermal signatures. Also, If there are differences in age of the bearings it can sometimes be seen thermally. We want to compare apples to apples. Inboard and outboard bearings on the same shaft will typically run at different temperatures, which makes them less than ideal for comparison. We want to compare inboard bearings to other inboard bearings on similar equipment.

In the first set of images above, all of the bearings in the head roll assembly of the conveyor should have the same—or very close to the same—thermal signature or pattern (within ~5-10·F/3-5·C). In the images below, the upper bearings of the three shafts should be similar in temperature as each other, while each lower bearing should also be similar to the other lower bearings provided, they all have the same load and cycle time. This seems to go against the same shaft approach, but the equipment dictates the lower bearings are going to be hotter than the uppers. However, they should be close in temperature with each other.

So how hot is too hot when looking at bearings? There is no one temperature difference level that demands corrective action unless it is extreme—but there are a few guidelines. One of the most commonly used “critical temperature” is the upper temperature limit of the lubrication used in the bearing. Another approach may be to use the lowest maximum temperature of the associated components. For example, with a seal, bearing, lubricant combination you would use the component with the lowest maximum operating temperature specification as an alarm limit. Of course, in condition monitoring, we are trying to capture component failures as early as possible.

Remember to allow for the heat losses from the point of generation to the surface when estimating internal temperatures. When inspecting, you are only seeing the surface temperatures, not internal temperatures. It’s usually going to be hotter inside where the heat is originating than it is on the surface where we can detect it. If manufacturer specifications are available for the bearings you’re inspecting, you can use them to establish your upper temperature limit. If that data is not available, the temperature of the bearings should be within ~5-10·F/3-5·C warmer than the motor housing at the end bell. Again, this is a guideline, not a specific standard.

Bearing inspections can seem tedious at times, but when anomalies are found, the pursuit for the solution can be fun and at the same time a learning experience. Thermography is a wonderful tool for inspecting bearings as it is fast and can help us allocate other diagnostic resources.