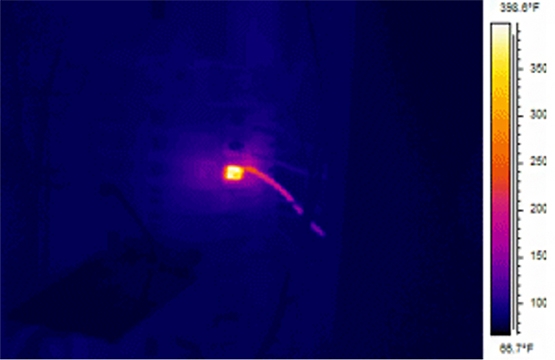 A common mistake made by a number of thermography programs is skipping infrared inspections of power and lighting panels or failing to properly access the equipment by removing the panel and the dead front. Power and lighting panels now support critical equipment such as personal computers, PLCs, networks, communications, and safety systems. Yet many facilities still seem to believe that these panels are non-essential equipment and do not need to be inspected.

Once during an inspection of a 225 amp service asset, a technician of ours observed what appeared to be several heavily loaded breakers with the covers still in place. A pre-inspection safety scan of the device with the cover in place revealed nothing that seemed alarming except for one 20 amp breaker that had an apparent surface temperature of approximately 130°F (54°C); slightly warmer than what one might expect to be normal.

Upon removing the covers the thermographer encountered what was actually a high resistance connection on that breaker…measuring nearly 400°F (204 °C) on the load side! (IR Image, above) The failure of this component would probably have tripped the main and thus all power to the panel’s 42 circuits.

It never ceases to amaze clients of ours when they see large thermal gradients like this. What else can be hidden by those panels? Mains, neutrals, load balances, broken wires, burnt or discolored components, and of course the bus and load connections.

If you look at; the visual image closely, you will see the discoloration that had occurred on the faulty connection due to overheating. Good thermographers will not only know how to Think Thermally®, but must always remember to “Think Visually” as well.

In the case of this anomaly, merely tightening the connection is not enough. The breaker should also be replaced and the conductor will need to be cut back or replaced and properly torqued. Finally, reassessment of the repair and re-qualification of the asset will validate the success of the inspection and ultimately lead to a more safe and reliable environment.