Conducting an Inspection under Cloudy Conditions 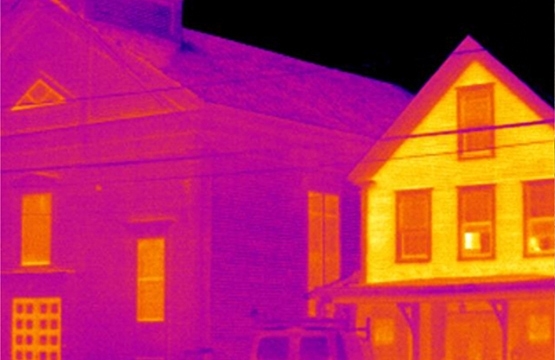 Solar loading is not just a warm-weather concern for building thermographers. We must deal with its impact year-round, regardless of the season. Additionally, when it comes to the sky conditions, solar loading is not only a problem on sunny days. Even when it is cloudy, solar loading still affects thermographers when inspecting buildings, especially from the exterior. As we learn in Level I, heat transfers from where it is to where it isn’t, so solar loading on the exterior will cause transfer into the structure, and that can lead to some confusing patterns.

For those of you that have ever received a sunburn under overcast skies, you have firsthand knowledge as to why we encounter problems imaging building exteriors on cloudy days. Now, while it is ultraviolet radiation that burns you, there is still sufficient visible and IR wavelengths of energy transferring through the cloud layer and warming building surfaces. The problem for thermographers, though, is that this may not seem obvious when conducting an inspection under cloudy conditions.

On bright, sunny, days solar loading is both intense and readily apparent. Wall surfaces are rendered uninspectable the very moment the Sun hits the building, masking over important thermal patterns that may have been present under steady state conditions before sunrise. This is one such example where we can clearly see, visually, tree shadows on the east facing elevation of this building. These visible light patterns correlate perfectly with their thermal counterparts in the infrared image.

It will stay this way until the Sun leaves the surface and it has sufficient time to normalize. Keep in mind, though, that you will likely need to wait up to three hours before inspecting surfaces on light-frame buildings and up to eight hours for masonry structures, per industry standards, for the effects of solar loading to dissipate.

On cloudy days, these effects are still present, as seen in the following example:

Even on overcast skies, these effects are still possible to happen. To illustrate this point, even though it was a pleasant day when you would not normally conduct a building inspection, we grabbed a camera and took the two images above. The two buildings, a church and a store, show two very different thermal patterns thanks to the effects of solar loading and the color differences of the siding. This would be the case no matter what the delta temperature was inside to outside. Had this image been captured early in the morning before sunrise, the two structures would likely have appeared very similarly. At this point, however, we are not going to see much from the outside, especially on the building with darker siding.

So remember, when conducting an infrared building inspection any time after sunrise, whether on a clear or cloudy day, solar loading is still an issue. Solar loading can be a benefit in certain situations, particularly if we’re trying to find trapped moisture in materials. While its effects are not as intense or obvious in overcast conditions, there is still enough energy reaching the building that it will impact your ability to conduct a successful inspection, even when you cannot see the sun.