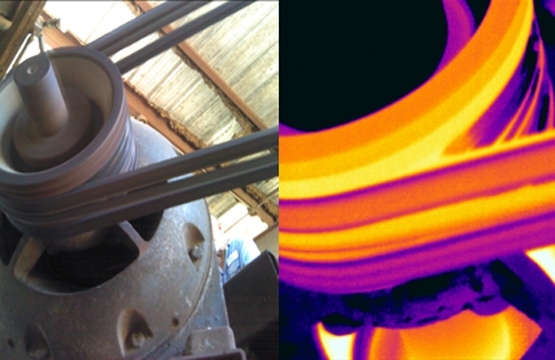 During our Level I – Thermographic Applications class we teach students there are four things that cannot be changed on saved IR images: focus, range, time and date stamp, and perspective. This means it’s very important to ensure you have a properly focused image, in the proper range (assuming the camera has multiple selectable ranges), the time and date on your imager are correctly set, as well as the right perspective before you save the image to your camera’s storage medium.

However, this leaves plenty of things we can (and may want to) change on a saved image. Span, level, and palette are three of the settings we can change on a saved image that will alter the appearance of the image. Many cameras available today allow the thermographer to make changes on a frozen image, but not on a saved image. To make changes to a saved image often requires the user to download the saved images to a computer and use the camera manufacturer’s PC software to manipulate the image. Therefore, it’s very important to be familiar with your camera’s capabilities and the supporting reporting software and capabilities.

Software for the IR cameras is usually included with the camera as an install disk, or you can download it from the manufacturer’s website. Remember, there may be multiple versions of software for one camera. Some cameras include a free basic version of the software, while the full version (with more editing capabilities) must be purchased. Licensing is another consideration to be aware of. If the software only comes with one license, then you can only install it on a certain number of computers. Ensure you understand what’s included and what will incur added costs, or things can become very expensive very quickly. And always check with your IT department for permission to download first. Some facilities do not want the software on their network. If this is the case, a “stand-alone” desktop or laptop will be needed.

Which palette would you rather use?

Besides level, span, and palette, there are other useful measurement variables or settings in versions of both the camera software and the PC software such as emissivity, background, and transmission, which must be set to get a more accurate temperature measurement. Spot temperatures, area boxes, profiles and reference markers can be included to further analyze found anomalies. Many current editions of camera and PC software include “picture in picture” and image blending capabilities. These functions can be useful in reports to pinpoint problems.

If you’re using a camera that has voice, visual photo or text annotation functions, the software for your camera or PC will allow you to review your text or voice notes that were attached to the saved image. This is very useful when generating reports to help increase the accuracy of the report. In cameras that have wi-fi capability, the software can help facilitate multiple personnel at remote locations all watching what the camera sees simultaneously and in real-time on their computer, tablet, or smartphone. Certain versions of IR camera software will permit remote control of some functions of the camera. There are numerous apps currently available, which allow multiple users to review saved thermal images or communicate with the camera from their mobile devices.

Report generation is one of the most useful functions found in the camera manufacturers reporting software. Most versions include templates and allow you to edit the document in popular programs such as Microsoft Word after creation. Reports may also be exported to other programs such as Excel or Adobe Acrobat.

When you find potential problems during an inspection, it is critical to report your findings in a manner that is visually appealing and logical. Your camera’s software can help you do this if you take the time to learn it and it should be considered an essential part of a successful IR program.