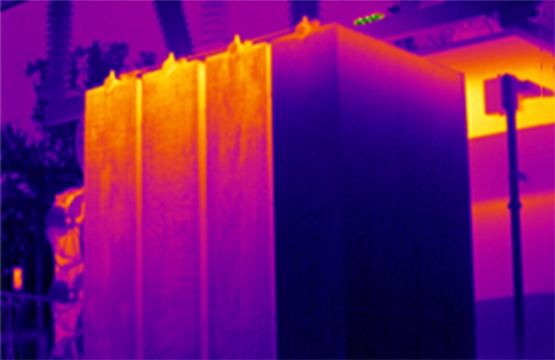 During the discussion of heat transfer theory in our Level 1 Thermographic Applications training, convection is discussed in great detail. Convection is an important topic in the development of a thermographer since every surface we view through an infrared camera is subject to convective cooling or heating to some degree. Even in conditions where no air movement is detectable to the thermographer, there are in fact differences in temperature, density, moisture, and pressure in the air mass that result in air movement. The degree to which it moves is driven by several factors, including the temperature of the air.

In building diagnostics, it becomes important to understand how differences in air temperature can effect airflow in, out, and within a structure. Since air has the effect of warming or cooling surfaces that it comes into contact with, excessive air movement can have unwanted impacts on the thermal conditions of a building. Understanding the phenomenon called the “stack effect” is as simple as exploring how convection works in action.

Convection is the transfer of heat energy in fluids (or non-solids). Air is a fluid, as is water and cooling oil in transformers. As molecules within a fluid medium exchange heat energy, the warmer ones have more movement or vibration and spread out resulting in lower densities than cooler molecules. Just like all objects in our world, air molecules are affected by the force of gravity. The heavier/denser an object is the greater gravity’s pull. Note the connection between Newton’s Law of Cooling and Newton’s Law of Universal Gravitation. This results in a difference in pressure between warm and cool molecules within the fluid.

This difference causes movement within the fluid, which is perfectly demonstrated in a properly functioning bank of transformer cooling fins (see image at top). In the three sets of tubes, on the left, you see a “normal” convective pattern. Internal to the transformer are the windings and core, which produce significant heat during operation. The oil surrounding them absorbs heat energy, and becomes less dense, rising to the top of the tank. The oil enters the cooling fins, which has the effect of increasing the surface area exposure of the oil to the cooler ambient air. As the oil cools, it becomes denser and sinks due to gravity. This difference in density allows the cooler oil to displace the warmer oil in the tank, causing a convective loop. In case you were curious, the fourth set of fins (on the far right) has a flow obstruction and is not cooling correctly. 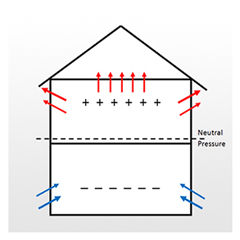 The stack effect in buildings works much the same way. Just as in the transformer example, instead now we have cool air that is denser and heavier displacing warmer and lighter, less dense air. This phenomenon is enhanced as the inside to outside temperature differential increases, as well as in taller buildings. If you’ve ever been in a high-rise building and rode the elevator, you may have experienced this phenomenon. Stepping on or off of the elevator you can often feel air moving up the shaft, blowing on you through the gap between the elevator car and the floor. During the winter stack effect can account for an increase of 4 Pascal for each story of a building. But during the summer a 1.5 Pascal difference may be present. The image on the left illustrates negative pressures on the bottom story resulting in cool air infiltration and positive pressure on the top story producing warm air exfiltration typical of winter conditions.

The stack effect can overcome the normal thermal and airflow patterns of a building and cause higher than normal levels of air exchange. Efforts are often undertaken in building design to combat these effects, such as installing revolving doors at entrances and exits. The upside to this effect however is in its power to reveal where a building has airflow pathways that are not intended.

If the thermographer is diligent and in the right place at the right time, these pathways can be detected, and corrective action is taken. As with many other aspects of building thermography, the solution isn’t always simple. Think Thermally® and keep in mind all of the dynamics that might impact airflow in, out, and within the building, including the stack effect.