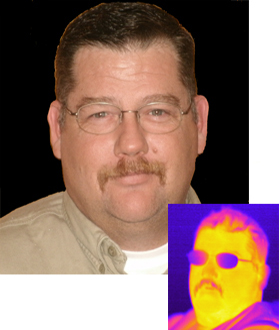 Matt joined The Snell Group in 2000, as an On-site Technician for one of the company’s inspection clients. In 2009 he became a Regional Reliability Technician and began travelling to a wide variety of sites. Later still, he has become an Instructor and Consultant.

Matt’s career started as a Maintenance Technician for an agricultural chemical manufacturer. After two years turning wrenches and welding, he moved into the electrical side of maintenance. After earning a Nebraska Electrical Contractor’s license, he accepted a position with the maintenance provider at a large corn milling plant in the Midwest as an industrial electrician. Matt was exposed to the world of infrared as an escort for the insurance underwriter in the mid-1990’s. In 1999, Matt attended a Level 1 class with The Snell Group. He went back to the plant energized, and started the development of the new infrared thermography reliability program at the plant. Shortly thereafter, he was exposed to electric motor testing and helped develop their motor reliability program.

When Matt joined The Snell Group in 2000, he was a multi-disciplined technician for both infrared and electric motor testing. He has attained Level 2 Infrared Thermography, Advanced VFD Analysis, Advanced Motor Testing Analysis with both PdMA and All-Test Pro hardware, RCA, RCM, Airborne Ultrasonics and Level 1 Vibration. He also has contributed to the current Electric Motor Courses. He uses his knowledge and expertise to help companies attain the desired results of a successful reliability program.

“ Excellent course – very helpful! The most useful part of the class for me was the electrical section. ”
-Adam Goglin
Bear Swamp Power Company
Rowe , MA
United States
See what else people are saying about Matthew »