Harmonics are quite simply, multiples of the fundamental power frequency. They have been around since the advent of non-linear or discontinuous loads. We can go back to the early 20th Century and the advent of the vacuum tube, for example, to identify some of the first power quality issues. However, even with the early problems, they were of such minimal effect that they were mostly ignored. Fast forward to the 1980’s and the personal computer revolution. It was also a time of great innovation for industrial electronics. Programmable Logic Controllers (PLCs), Uninterruptible Power Suppliers (UPS’s), Variable Frequency Drives (VFD’s) and electronic lighting. These new equipment’s presented serious power quality problems. As the effects of harmonic influence became more apparent, changes in designs, installation, and filtering emerged. Despite the general awareness and engineering changes to equipment’s, harmonics are still problematic, particularly at older facilities. In order to mitigate these problems, knowledge is key.

As part of attaining knowledge, the first thing we need to cover is; what are harmonics and how do they affect electrical distribution. As previously stated, harmonics are simply multiples of the fundamental frequency. The most common in North and South America is 60 Hz. Depending upon the order of the harmonic, or multiple of the fundamental, it will present differing effects on the equipment’s presented with them. Harmonics are classified as positive, negative, and zero sequence components.

Using 60 Hz as the fundamental it would be classified as the first and a positive, 120 Hz would be the second and a negative, 180 Hz is the 3rd and a zero harmonic: 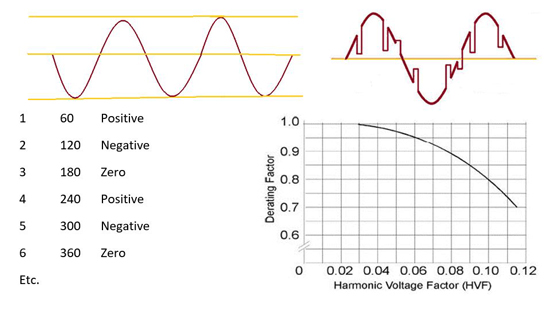 When Positive and Negative Harmonics are present, they tend to cancel out their effects. The heating caused by harmonics can be substantial. Given equal percentages of the first harmonic, the heating effects of subsequent multiples is equal to the square of the harmonic number. For this reason, NEMA has provided a “Derating Factor” called the “Harmonic Voltage Factor,” which compensates for increased heating by recommending reduction in motor loading.

Negative Harmonics; 2, 5, 8, 11, 14,17, etc., oppose the fundamental waveform and produce currents and magnetic fields that rotate in the opposite direction.; They become particularly troublesome to motors when present as these opposing currents and fields cause counter- torques that can reduce motor efficiency and increase operating temperatures.

Zero Harmonics; 3, 6, 9, 12, 15, 18 etc., are neutral to the fundamental waveform but still increase heating. Even multiples of the 3rd Harmonic: 6, 12, 18, 24 etc., are not as problematic as the odd multiples: 3, 9, 15, 21, 27 etc. These odd multiples are called “Triplen Harmonics.” These harmonics when present in higher percentages, overload the neutrals, and can have deleterious effects on transformers and other equipment.

Now that we have covered some of harmonic effects, we need to know how to identify their presence. Power quality analyzers and motor test instruments that perform signal processing or Fast Fourier Transforms, FFTs, can analyze the fundamental waveform and segregate the multiples of the fundamental frequency, as well as determine their individual magnitudes.

Localization of the source of harmonics is possible with motor test equipment, if both current and voltage FFT’s display both voltage and current at the same harmonic, fault localization is possible. From the point of amp probe connection, if the voltage harmonic peak amplitude is greater, the source of the harmonic is upstream of the connection point. If the current harmonic peak is of higher amplitude, the source is downstream of the connection point. Once the harmonic source is isolated it can be lessened or even fully filtered. Improper equipment installation and lack of proper filtering are the primary causes of harmonics effecting power. 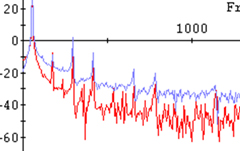 Attaining the proper knowledge, identification of potential problems and taking the proper corrective action is essential. Their many companies that specialize in correcting power quality problems, but you have to be aware of their existence.