Understanding a building insulation system may seem straight forward with R-value being used as a means of defining insulation performance. The higher the “R” number the better the performance. However intuitive this might seem, there is much more involved in understanding insulation. Insulation is used to reduce heat transfer between a surface and the ambient environment or between different surfaces. A good insulation or insulator will exhibit a property referred to as low thermal conductivity. In general, the lower a materials thermal conductivity, the better its ability to insulate for a given thickness. To accurately describe insulation, one must understand several different terms, such as k value, U value, R value and C value. We are going to explore these terms.

k Value: k value is basically defined as thermal conductivity. It is expressed as the rate of steady state heat flow through a unit area of thickness of homogenous material with a unit temperature gradient. It is usually measured in the amount of heat flow expressed in units per hour, for example BTUs per hour. To use water as an analogy, it would be like the amount of water flowing through a faucet over a set period. “Steady state” simply means the water pressure and the flow rate remain unchanged. Unit area is generally expressed in square feet. Homogenous material means one material, not more than one or several. Finally, we have “unit temperature gradient,” which is the difference in temperature between either side of the material.

Below is an instrument used to measure heat flow. 1-inch-thick square foot slabs are measured for 1 hour with a precise 1-degree F difference between the hot and cold plates. The resultant amount of heat transferred provides the “k” value for each material. 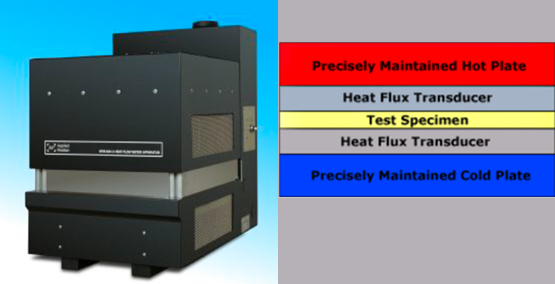 To sum up k value, we have heat flow, per unit area, per degree temperature difference, with units of BTUs per hour / per square foot, per degree F. Thermal conductivity is independent of thickness.

C Value: C value is defined as thermal conductance. C value is based upon the thickness of a material as compared to k value where thickness is not. C value for a 2-inch-thick section of insulation would be half the value of 1 inch of thickness.  C-value = k-value / thickness

U Value: The last term we have to discuss is U value.  It is referred to as “thermal transmittance.”  When we look at a building structure, a wall assembly will consist of multiple layers of differing materials to include possible air gaps between these materials.  U value represents the combined performance of all the materials in transmittance of thermal energy.

We can summarize the concepts that we have discussed as follows: