When performing energized electric motor testing, monitoring voltage is the most important parameter. If voltage is unbalanced it should be corrected as soon as practicable. A current unbalance will be a consistent symptom of unbalanced voltage. What if you have balanced voltage and unbalanced current? Depending upon the motor state and the level of unbalance it is possible to identify likely sources if a comparison to the impedance is conducted. 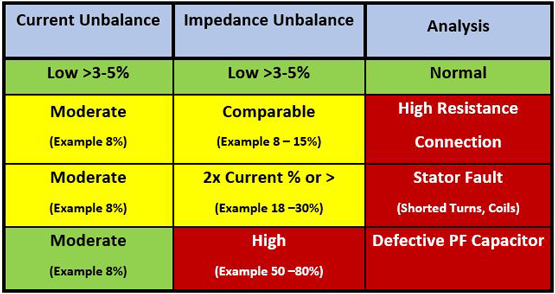 Impedance- is the total opposition to AC current. When calculating; it is the vectoral sum of both Resistance, Inductive and Capacitive Reactance. The resultant angle represents the total circuit impedance, but- it also represents the angular displacement between voltage and current. In 3 phase circuits, with moderate to fully loaded motors, the phase angle of voltage and current should be comparable in all 3 phases. This indicates that the motor and associated circuitry is resistively and reactively balanced. Unloaded motors routinely exhibit unbalanced current and impedance, therefore unloaded motors should not be analyzed for current and impedance unbalance anomalies.

(In general - if a motor is < 40% loaded disregard unbalances. Re-test when unit is loaded.)