IR Inspections of Buildings: the Good, the Bad and the Ugly

Ok, that’s a reference to one of my favorite westerns, but it is applicable to building inspections as well. Like many other types of inspections, conditions are among the factors that can make or break a successful endeavor. It’s my opinion that in Building inspections the conditions are more of a factor since there are so many elements to consider. The intent here is not to discourage inspections of buildings, but to educate, edify, and inform so that you can make the most of your efforts. Whether inspecting indoors or outdoors, there are many conditions to consider. Let’s take a look at them.

When outside there are two fairly obvious conditions to consider; sun and wind. Due to the pervasiveness of their respective impact, both are mentioned in the ASTM C1060, Standard Practice for Thermographic Inspections of Insulation Installations in Envelope Cavities of Frame Buildings. The sun will heat surfaces almost immediately upon exposure to the surface. Darker colored surfaces absorb solar radiation at a greater rate compared with lighter colored surfaces, so in instances of color variation, the rate of heating may be different. The exterior surfaces exposed to the sun could then become warmer than the interior surface and reverse the direction of heat flow in the sides of the structure facing the sun. For this reason, the C1060 specifies no direct solar exposure to exterior surfaces for a minimum of three hours before the inspection. Wind will generally cool exterior surfaces, and in accordance with Newton’s Law of Cooling, as wind velocity increases, so will the rate of convective cooling. The impact of exterior wind could result in a reduction in the interior to exterior Delta, thereby slowing conductive transfer. The C1060 specifies inspections not be conducted with wind velocities in excess of 15MPH.

The type of construction can have an impact as well. Brick facing or siding may have similar effects, slowing the rate of conduction by adding thermal resistance. Exterior insulation will do the same thing. One consideration, and this can vary across geographic regions and terrain types, is the angle of view. If the structure is tall, or you have one side that’s exposed opposite a side that’s below grade, your angle might be steeper. As you should have learned in Level I, as the angle of view moves from perpendicular so even very highly emissive surfaces can appear quite reflective. What might appear to be a variance in surface temperature might actually be a variance in surface emittance due to this phenomenon.

Let’s not forget about moisture either. When moisture is on a surface, we may experience evaporation, which will cool the surfaces. Sometimes, access to the entire structure from the outside could be an issue as well. Extremes in temperature can have an impact, even on the ability of your camera to operate. 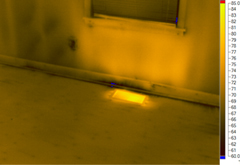 From inside the structure, there can be plenty of issues as well. Just like the outside, access to areas can hamper success. Access could be hampered not just by locked doors, but by areas being cluttered with belongings, furniture against walls, or covered heating and cooling vents. Speaking of vents, HVAC systems that are actively operating during an inspection interval can throw out some confusing patterns. It’s imperative to turn the climate control systems off before inspecting.

While the wind and sun will impact the patterns detected on the outside of the structure, they can also impact what’s seen on the inside. It’s important therefore to know not just where the sun is at the time of the inspection, but where it’s been in the time before the inspection. Solar exposure to exterior surfaces, as discussed earlier, can result in a reversal in the direction of transfer, overcoming the effect of the interior to exterior Deltas. In the images below, there was virtually no outside air temperature change, but the sun was on the exterior surface. In the first image (left) the pattern associated with settled blown cellulose insulation is apparent. In the later image (six hours after the first) the solar loading on the exterior was sufficient to reverse the pattern previously seen.

It’s also important when inspecting a frame structure, to define the thermal envelope of the building. This is the area that is heated and cooled, insulated versus not insulated. It’s surprising how many building occupants aren’t sure of where insulation starts and stops, or where HVAC is applied versus where it isn’t. Understanding the thermal envelope is very important because the thermal patterns you’d expect to see can be vastly different.

Almost nothing in thermography is as easy as it might seem, and Building inspections are no exception. With some understanding, consideration, and when you Think Thermally®, you increase your chances of success.