Thermal Patterns can be Deceiving 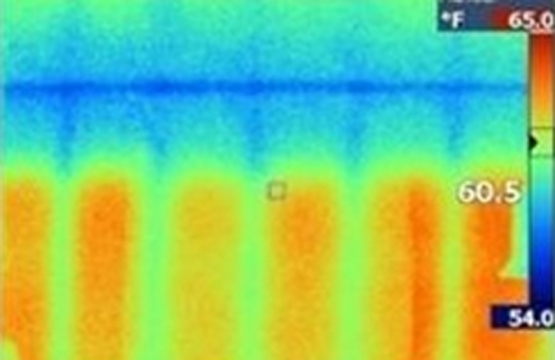 When performing a conduction inspection on a building many of the thermal patterns detected can be deceiving. Misinterpretation of patterns can be caused by a variety of factors, including (but not limited to) solar loading and soffit/eaves shading.

Solar loading can make inspections of the outside of buildings difficult, if not impossible. Solar loading occurs on any surface that is touched by solar energy, which causes the surface to heat up. This can obscure, or mask, any thermal patterns that may be present. The effects of solar loading can last up to 8 hours after the sun goes down for brick and masonry, and up to 3 hours for wood frame buildings. Solar loading does not only affect the outside of buildings, but it can also result in confounding changes to thermal patterns indoors as well.

The images above are of the same interior wall, taken six hours apart. In the image on the left, it appears the blown-in cellulose insulation has settled in the wall cavity, leaving the top of the cavity essentially uninsulated. Six hours later, after the sun has been shining on the wall, the thermal pattern is not detectable because of the solar loading on the outside wall. When performing an IR building inspection, you must always be aware of not only where the sun is, but where it has been.

This image of an interior wall at the top of the page was taken during a conduction inspection. This thermal pattern would lead one to assume that there is a lot of missing insulation in this wall. But is there really a problem? Things are not always what they seem, and as the saying goes, assumption is the mother of all screw-ups. In Level I students learn the importance of looking at both sides of the wall. 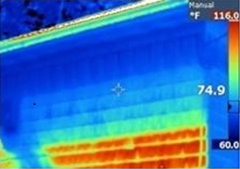 Soffit shading and solar loading are just two of the reasons why we recommend performing building inspections early in the morning or on a cloudy day. This way the sun won’t have sufficient time to cause the pattern we see here in the two images, preventing a possible misdiagnosis. Hopefully, this will help you better understand how some thermal patterns can be deceiving, why it is important to inspect both inside and out, and always verify found “problems.”