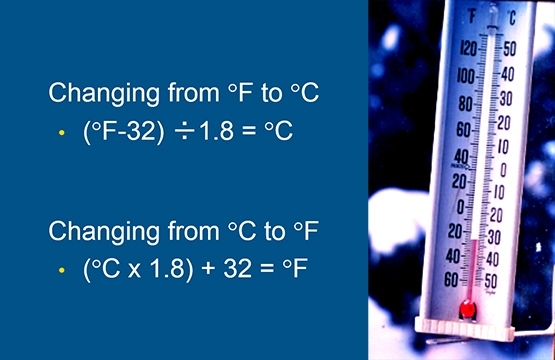 Temperature is one of the most frequently measured variables on Earth, but is generally one of the least understood. We discuss temperature measurement scales in Level 1 - Thermographic Applications. However, Level 2 - Advanced Infrared Thermography is where we talk the most about temperature and the necessity of the putting temperature into context for the end user of your thermographic report.

As part of our discussion of temperatures, we discuss the relationship between Fahrenheit, Celsius, and how to convert from one scale to another. The formula for converting Fahrenheit to Celsius is (F-32) ÷ 1.8. When converting from Celsius to Fahrenheit the formula is (C X 1.8) +32. Also, we discuss the conversion of temperature difference from one scale to the other using the value of 1.8 as a multiplier or divisor.

Take a temperature figure, say 80°F. When I assign the value of 80°F to a surface, or air, or whatever, I’m saying the magnitude of heat energy is equivalent to 80°F. When converting a magnitude of energy from one scale to another, I would use the full length conversion formula.  Let’s say I’m inspecting an object, and I compare its temperature to that of a nearby similar object. The difference between them measures 80°F.  In this instance, 80°F is the difference in the temperature measurement between the surfaces, not a magnitude of energy equivalent to 80°F. The temperature differential is 80°F, which might mean one object measures 40°F and the other measures 120°F. Or one might measure 120°F and the other one 200°F. I’m measuring a difference in temperature, not a level of energy present as I would be if I assigned a temperature of 80°F to the object. That’s where the difference is, and why there are different conversion formulas for each circumstance.

Remember, the difference between a magnitude of heat energy and the comparison from one surface to another. When we’re dealing with magnitudes of energy, convert using the full formula. When dealing with differentials, use the 1.8 value multiplier or divisor. It’s easy to get confused, but if you remember these key differences you can avoid making this common mistake in the field.

If you liked this post, you might enjoy our Knowledge Briefs Newsletter. Receive new posts delivered right to your inbox every week!
Sign-Up Here!
#Infrared Thermography
#Temperature