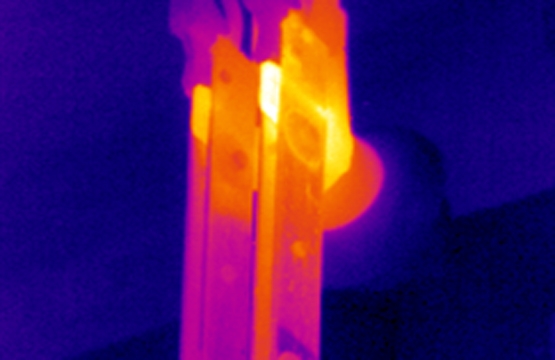 Let’s start this discussion by clarifying that on switch contacts we should be saying “apparent switch temperature”.  As discussed in both our Level I  and Level II courses bare metal surfaces do not emit well, and accurate radiometric temperature of them is a near impossibility. Having said that, we can utilize the apparent temperature of switch contacts to give us an idea of how serious a detected defect might be.

One failure mode that is fairly common in switches is annealing. Annealing can be performed as a heat-treating process for metals to be used for a specific purpose. It can also happen unintentionally in metal components that are overheated during their normal use. We discuss the Joule Effect in Level I  and during our IR for Electrical Inspections courses. The Joule Effect is the root cause of both normal and abnormal heating in electrical systems. As current moves through electrical resistance, heat is generated. This phenomenon may occur in switch contacts of any size.

In annealing, the hardness of the metal in question is decreased, and its ductility increased. Ductility is a measure of a material’s ability to deform before rupturing. Malleability is a similar property. In certain applications, these are desirable effects, but not desirable for switch contacts. The contacts of the switch rely upon spring tension between them to hold their junction closed tightly enough that electrical resistance is not adversely affected. Annealing of the metal in switch contacts can cause that spring tension to diminish, thereby increasing electrical resistance at the junction. See the image above, abnormal electrical resistance is evident in the pattern of localized heating at the pinch point of the switch.

When metals such as carbon steel are being annealed for a specific application, the range of temperatures utilized can be quite high. Unintentional annealing, however, can occur at relatively low temperatures if over a long enough period of time. Generally speaking, temperatures as low as 200°F (93°C)can cause annealing if the metal in question remains at that temperature greater than 30 days or so.  While the metals used for switch components are not carbon steel, they can suffer similar effects at similar temperatures. Many of the demos we perform  in our courses demonstrate that bare metals can radiometrically measure as low as 1/3 third their actual temperature. So, imagine that you detected an apparent high resistance connection on switch contacts and the measured temperature is around 125°-130°F (52-54°C). The actual temperature could be 2-3 times higher, so perhaps as high as 350°-375°F (177-191°C). How long has this switch been in this failure mode? If the inspection interval is greater than 30 days, it could be completely feasible that the contacts of your switch have begun annealing. The recommended repair action at that point is likely a wholesale replacement of the switch contacts or in some cases the entire switch itself.

Keep annealing in mind as you inspect switches of any size. From substation type equipment down to small disconnects on control panels and such. Annealing as a failure mode can lead to catastrophic failure if left unchecked.