Is the wind blowing through my house? 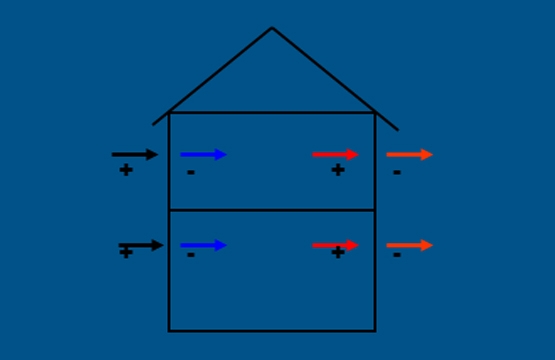 One of the best things about Spring each year is the feeling of renewal. Dormant trees begin to bloom, the grass goes from sadly brown to fresh, healthy-looking green. The weather warms up, which is more of a blessing in some parts of the country than others. Along with that warming though we sometimes get conditions that are less than pleasant; like storms.

Some parts of the country are accustomed to windy conditions while others only have stronger breezes during certain parts of the year, like the springtime. If windy conditions aren’t the norm for a particular area, sometimes building envelope issues that wouldn’t be evident any other time are revealed. One of those conditions is what’s known as “wind forced air leakage”, and it works like this:

The tricky thing about wind forced air leakage is that due to the pressures involved it will quickly overcome the naturally existing airflow pathways in the structure. So, if you address airflow pathways that you’ve discovered in non-windy conditions, you might not be addressing the same pathways that allow wind forced air leakage to occur. For this reason, inspection efforts aimed at finding those pathways necessarily must be performed during the conditions when the air leakage occurs; i.e. when it’s windy. Additionally, you want to be looking in the right place. You’d view the windward side from the interior of the building.  You want to see the outside air coming it.  To catch the pathways of the interior air exfiltrating, you’d view the leeward side from the building exterior.

Now it’s important to understand that to see air leakage in a frame structure that there needs to be a temperature differential inside to outside. The Springtime is often breezy, but it’s also the time of year where inside and outside temperatures are probably closest to one another. The ASTM E1186 is the Standard Practices for Air Leakage Site Detection in Building Envelopes and Air Barrier Systems. It specifies a 9°F inside to outside Delta T for air leakage inspections. If one doesn’t exist naturally, it can be artificially enhanced by utilizing the HVAC system.

Enjoy the changing of the seasons and Think Thermally!®