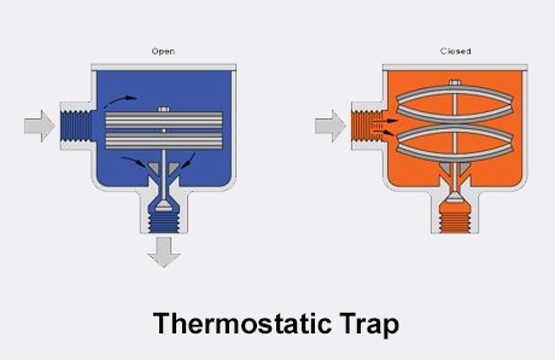 Most people inspecting steam traps believe it to be a  straightforward thing. It should be hotter on the steam side of the trap and cooler on the condensate side. Because there are many different styles of steam traps and several different methods of removing the condensate, it may not always be that simple. 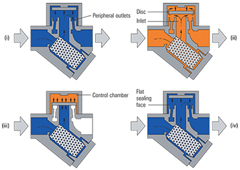 In higher temperature systems, the most common trap styles are either float-style or inverted bucket mechanical traps. The condensate level in the trap triggers the purge of condensate utilizing the pressure of the steam system to move the condensate out of the cavity/bowl of the trap, back toward the boiler system. These are the systems that are fairly straight forward to inspect. However, there are some low-temperature and low-pressure steam systems that do not have a very large temperature difference, which makes evaluating the operational condition more difficult.

Steam traps can be broken down into three basic types:

Mechanical:  By far this is the most commonly encountered trap in industrial applications by the use of floats and valves.

Thermostatic:  This style of trap uses the temperature difference between steam and condensate to activate the removal of the condensate. A bi-metallic element or temperature-activated bellows can be found in this style

Thermodynamic:  This style of trap uses the dynamic principals of steam vs. condensate (Bernoulli’s principle). When condensate is released through an orifice the speed increases and a pressure drop occurs. This will flash steam to create higher pressure to close a valve (disc) or slow the discharge speed of the trap.

Thermostatic traps use the difference in temperature between the steam and the condensate. With this temperature difference inherent to the design, inspections are fairly straight forward. Very similar to mechanical traps, properly functioning traps should appear hotter on the steam side of the trap vs. the condensate side. Even with this style, a “good” trap can appear “hot” on both sides of the trap if the trap has just cycled.

Thermodynamic traps often are very difficult to inspect as there may not be much temperature difference across the trap. A better inspection method for this style is to compare line temperatures approximately 12 inches (30 centimeters) from the actual trap, looking at both sides (using high emissivity targets) to give the condensate time to cool down. By design, these traps most often have steam passing through them constantly. So, a different inspection method needs to be employed. Ultrasonics is a viable alternative inspection method to use.

The inspection of steam traps and systems are an important part of a reliability program. Water should not enter the steam-driven equipment, nor should steam be present in the condensate system.  Not only for the function of the system but for the cost of operating the system. Wasted steam is wasted money. So, learn what types of steam traps that you have within your systems and the “normal” thermal patterns for the traps that you have. Keeping your system healthy will raise uptime and reduce costs.