If At First You Don’t Succeed… STOP! 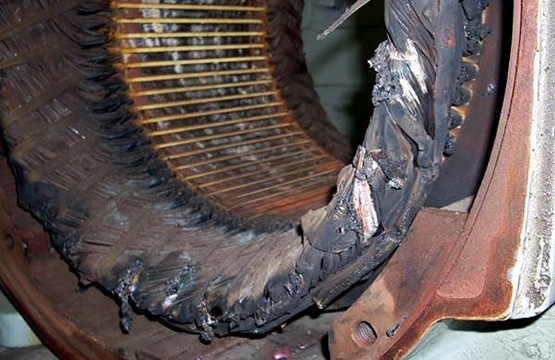 I’m a military guy. My father was career military. I spent nearly a decade in the military and I’ve always been a student of military history. General George S. Patton was one of my childhood heroes; I even did a term paper on him for American History in 10th grade. Patton is credited with an adage that I find inspirational; “You’re not a failure until you quit.” Most of us are taught by our parents, coaches, and other leaders in our lives that we should keep trying something until it works. Another famous adage says “If at first you don’t succeed, try, try, again.” Ordinarily this is something I think we should heed… unless that is, if we’re talking about starting an electric motor.

In my early days as an engineer, I was assigned to an earth moving project as the controls engineer. We had over eight miles of conveyors that moved soil and rock for a project building the 5th runway at Atlanta Hartsfield/Jackson Airport. I monitored conveyor activity and made repairs on the fly when there were failures. Material falling off the conveyor wreaked havoc on proximity sensors and frequent power transients caused PLC errors, needless to say, I was pretty busy. We had a permanently assigned electrical contractor on site too who installed motors and other large components. On one memorable occasion, we had a power surge that caused the PLC controlling one of our main conveyors to fault, and the conveyor to stop dead.

I quickly cleared the faults on the drive, re-booted the PLC, and we were ready to re-start. The only problem was that the 300 foot conveyor still had literally tons of material on it. Dirt and rock had to be manually shoveled off of the conveyor to lighten the load on the drive motor. The electrical foreman explained to the project manager that attempting to re-start the motor under such a load would damage it, but as soon as I had the PLC ready, the PM demanded that we try it. Keep in mind this was a 250HP motor on the drive end of an enormous conveyor. We pressed the start button, the soft start pulled in and the motor started trying to turn. The belt actually moved about six feet before the drive tripped. The PM said “Again!” So we did; another 6 feet of movement. This encouraged him, and with a crazed grin, he asserted that we could limp the belt along until it dumped enough material to start and keep running.

The electrical foreman advised against this course of action. The PM responded by growling how many dollars-per-minute we were losing and demanded again that we do as he said. So, the cycle went: start, run 10 seconds, trip the drive, reset, and repeat. On what poetically was the 13th try, the motor responded by shuddering and then locking up in a cloud of smoke. The consequential motor replacement took infinitely longer than shoveling material from the belt would have.

In the years since this occurrence, I’ve both heard and witnessed similar instances where motors that were tripping drives, or even circuit breakers, were repeatedly re-started until they either failed catastrophically or started and ran. In the instances where the motors started and ran, the operator in question always declares victory, since the motor is running fine. Or at least appears to be.  Just because a motor will start and run does not mean that it is in fact in good condition. The wide spread practice of repeated start attempts of electric motors is just plain bad. One doesn’t need to be a PhD Electrical Engineer to understand why.

Those with Motor Mojo know that an electric motor draws the highest amount of current in locked rotor condition. When the motor shaft can’t turn because it is in a mechanical bind, the motor draws maximum current until it trips the device feeding it or until the shaft can move. In either case, the resultant effect of maximum current for a prolonged period is excessive heat in the motor windings. Motor windings, as some of you know, are wound with a special wire called magnet wire, and the insulation is a thin layer of a shellac-type substance that is very susceptible to damage from heat. Once there’s insulation damage, turn-to-turn shorts in the windings are more likely to develop. Most electrical failures in motors begin their life as a turn-to-turn short.

So when you try, try, and try again to start that electric motor, you’re ultimately shortening its operating life. Getting up when we fall down is one of the things that make us humans, and in many cases builds character that helps us succeed in future endeavors. But when it comes to getting that bound up motor to move, if at first you don’t succeed, stop. Clear the obstruction, allow the motor to cool, then try, try again.