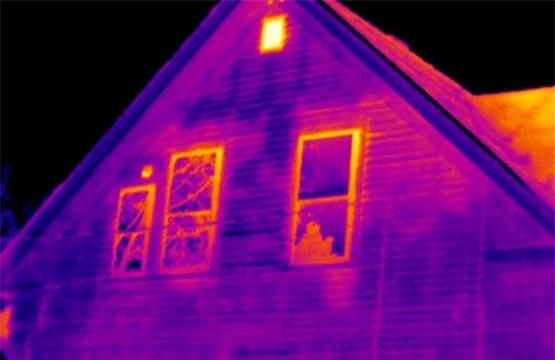 As time goes by and I get more time doing IR building inspections and working with other thermographers, I’ve noticed some common mistakes that thermographers can make. These mistakes could be due to lack of experience, lack of quality training, or both. Mistakes are easy to make if you don’t know any better. It’s likely that I notice these issues because I also spend a considerable amount of time instructing Level 1 Thermography courses and I discuss these subjects in-depth during class.

The mistake I want to talk about this month is using “Continuous Auto” level and span during a building inspection. An inexperienced thermographer asked if I could bring him along on a building inspection to gain some experience and I agreed as this was a fairly simple and straightforward inspection. After arriving on-site we got our cameras out and started to take a look. I noticed that he had brought a new camera with him to use and I asked him how it was going. His reply was a bit startling to me, “This camera is great! It’s all automatic all the time. I don’t have to do hardly anything.” Oh boy, where to even begin with this one.

Rather than just tell him about all-auto cameras I decided it would be better to show him. We were beginning to inspect the outside of the building and were looking at the same exterior wall when I realized I could start the lesson right then and there. I had both of us freeze an image of the same wall with the same perspective, the only difference being that I was manually adjusting my camera while his used the auto function. When we compared images, I didn’t have to say a word, all the evidence was right there in front of us. In the images below we can see the auto adjusted image on the left and the manually adjusted image on the right. With the auto adjusted image we don’t get sufficient detail on our object of interest, which is the side of the house.

Once we compared side by side images of the same target, my inexperienced compatriot started to see the error of his ways. In auto mode the camera takes into account the hottest and coldest surfaces it “sees” and adjusts the span and level accordingly. In this case, the auto camera took the cold sky into account and made the span much too wide (-22°F to 40°F), leaving him with insufficient detail on the object of interest. On the other hand, with manual control, I was able to set the camera to disregard the cold sky while optimizing my span and level (20°F to 40°F), giving me all the detail I needed.

Upon moving inside the building we ran into another situation where manual span and level control was a must-have. Our object of interest is the wall on the right side of the images below. There was also a steam pipe in the same small area that wasn’t part of our inspection. As we can see on the left image, the auto function on the camera included the hot pipe leaving us with a span that’s much too wide to see any of the details in our object of interest. On the right hand image we used manual control and were able to disregard the pipe, leaving us with plenty of detail in the wall on the right.

Camera manufacturers and salespersons will tout auto as an awesome feature that magically enables the camera to do everything for you. “Just point and shoot! It’s all auto all the time so you don’t have to adjust any settings!” And that’s true. You don’t adjust any settings. But the question is, are you getting good data? As we’ve seen from the instances above, manual span and level control is a must have on your IR camera when it comes to building inspections (or any type of IR inspection for that matter). Without it, you’re putting the camera in charge and it’s going to constantly adjust span and level based on what is in its field of view at that moment. Many times this leaves us with a span that’s much too wide for us to see the level of detail necessary for a quality inspection.

If you liked this post, you might enjoy our Knowledge Briefs Newsletter. Receive new posts delivered right to your inbox every week!
Sign-Up Here!
#Buildings
#Infrared Thermography
#Inspections
#Temperature
#Weatherization