Can "Cold" Indicate an Electrical Fault? 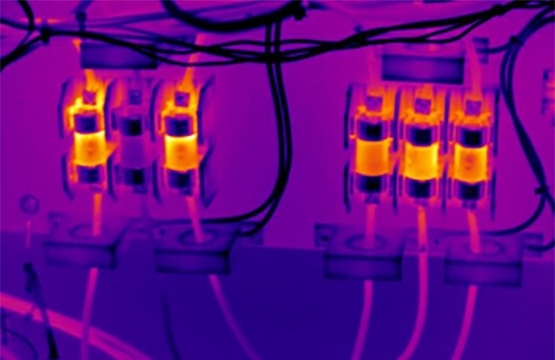 As thermographers we have it drilled into our head to look for “hot” spots. In our search for these hot spots, however, is it possible we’ve been overlooking potentially important “cold” spots?

Consider these images below and ask what is, or can, be causing this? Also ask, “would I report it?”

At first look, the image to the left shows us a hot spot on phase B load side of the contactor. Some may stop there and report, but this image should lead to the question. Do I have seven other connection issues (A and B phase line side and load side) or is there a problem with C phase? As thermographers we keep a hands off or "no contact” policy as a means of safety so it can be difficult to verify the cause. If you have a qualified escort who has a meter with him (as I did), he can check for voltage and amperage. In this case, voltage was present in C phase but the current was at 0A the other phases were at 21.5A.

Not knowing the equipment, I had to ask the escort if there were single phase loads present on this system (yet another question the image brings up!). The system in question was a heat-treating process they were having some issues with. The problem was the liquid in the vat was not coming up to temperature very quickly. All the elements should be “on” at the same time, the cold C phase indicated that it was open in that phase or set of elements.

The image to the right brings up the same questions, but with different results. In this case, the fuse group to the left would be normal at this point of the heating cycle (maintain current temperature). In this device, elements are turned on and off as needed to maintain a given temp. I’m not sure of the wiring method used, but when we came back later both fuse groups looked the same when the vessel called for more heat.

So, what does all this mean?

The image on the left was reported as two faults: The B phase connection and the loss of C phase loading. The image to the right was not reported as there is no fault. Single phase loads on a three-phase system can be tricky especially if they cycle in and out.

Things that look cold can indeed be a problem in an electrical system, but the process and the control methods must be understood before a “fault” can be declared. Don’t be afraid to ask questions!

If you liked this post, you might enjoy our Knowledge Briefs Newsletter. Receive new posts delivered right to your inbox every week!
Sign-Up Here!
Electrical
Infrared Thermography
Inspections