Many times in my classes I’m asked “what are the most interesting thermal images that I’ve taken.” I always think back to a time that I was asked to look at a hot air balloon by the pilot of the Mayflower.

It was a great afternoon during Canton, Ohio’s “Hall of Fame” week and every year there is a balloon festival. I thought, “this year I’ll bring my infrared camera and try to get some good images.” At one point the pilot of the Mayflower balloon walked by and saw my thermal imager and it piqued his interest.

After a quick Level 1 course, he was hooked. I asked him, “do you think heat rises?” I could see in the pilot’s eyes that he started to “Think Thermally™”! He answered correctly…”No”.

Many people answer that question incorrectly due to not thinking it through. Heat is energy and it will always flow from warmer to cooler. However, when air is heated it becomes less dense, making the warmer air molecules rise. The fuel, once lit, is used to heat the air which rises and becomes trapped inside the balloon. Air can be heated pretty quickly and become light enough to lift the balloon.

The pilot had some great questions about heat transfer and the effects the heat on the materials of the balloon. He was starting to think about the baffles around the middle of the balloon. The baffles are how a pilot can control how much air is being released, which controls the altitude.

The pilot was curious to see if any flaws in the material would show up on an IR camera. The images taken are showing the balloon as it is getting ready for flight. The first image is showing one of the baffles that wasn’t working correctly. At first the pilot had a hard time getting the balloon to rise up. After the pilot saw the image, he spoke to the ground crew and they found one of the baffle lines had a small knot that was hanging up keeping the baffle open. 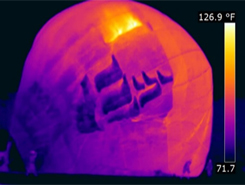 After the knot was fixed, the balloon lifted at a nice pace. The pilot told me that a balloon must be filled correctly and as evenly as possible. He said that a balloon’s fuel is for flying, so they don’t want to spend too much fuel getting it filled up. For people that fly balloons, that made sense to me.

It was amazing to see how much quicker the balloon lifted after the fixed line. The pilot was definitely happy to run into a thermographer that evening. The pilot said the day before, he was thinking of scrubbing the airshow. He tried multiple times earlier in the week to get a good lift, but was unsuccessful. It took too much fuel.

I learned so much about balloons that day. Putting a little thermal thinking to use helped that pilot too. We stayed in touch after that. The pilot owns an infrared camera now and it is part of the Mayflower balloon program. I get a warm feeling now every time I see that balloon.

If you liked this post, you might enjoy our Knowledge Briefs Newsletter. Receive new posts delivered right to your inbox every week!
Sign-Up Here!
#Condition Monitoring (CM)
#Infrared Thermography
#Inspections